Do you love concerts? This time Thunderkick software providers offer you to participate in unusual performance - watch the skeletons dancing and singing in Esqueleto Explosivo slot machine and have fun! This casino game is far from being called classical - it looks modern and even exotic in a way. With 17 lines to wager on it offers numerous opportunities to create winning sequences, and it makes sense when you gamble slot game for cash - if you selected free demo the only reward will be playing points.

The reels of this machine are totally filled with sculls - and it corresponds to the general theme of the game. The male and female icons differ owing to money value which is paid for them. The most lucrative and rewarding picture is the scull colored in pink having a rose on it. If the maximum combo of this image occurs on reels, you are rewarded with 125 game credits. Then goes the green lady with flowers awarding gamblers with 70 coins and the chain is completed with blue sculls with some teeth missed worth 35 credits. 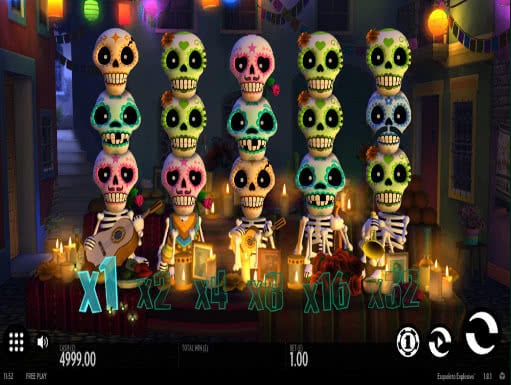 In Esqueleto Explosivo slots there is an Exploding Wild symbol - the image of a Vocalist. Not only it participates in combos, but also explodes occupying other positions on reels. Increasing multiplier is also included and it can reach x32 amount.

The game is developed for mobile devices, so it can be launched not only on the personal computer, but also on various gadget working on Android or iOS. The interface on both versions doesn’t differ much - both of the control panels include classical set of buttons. The starting one is a round key, and you should press it `after the bet is determined. The sound can be tuned corresponding to your preferences - you may even turn if off if you’d love to.