Being one of the most prominent slot producers, Thunderkick Gaming continues providing games of the highest quality. Zoom slot game is another great product designed like conventional fruit slot but with certain modern perks - it will appeal both to those who prefer gambling classics and innovative technologies. The peculiarity of this casino game is that it is divided into several areas thus obtaining six reels and sixty-four paylines.

Images used in this game consist of classic Bells, 7s, tasty Cherries, Lemons, Grapes and Melons - juicy diet of each self-respecting gambler. Wild and Scatter images are also included: the Wild plays the role of symbols substitutor while the Scatter is an expanding Zoom image which is able to expand on more than one position thus creating several combos in a single period of time. By means of the last one up to six unpaid spins may be activated. 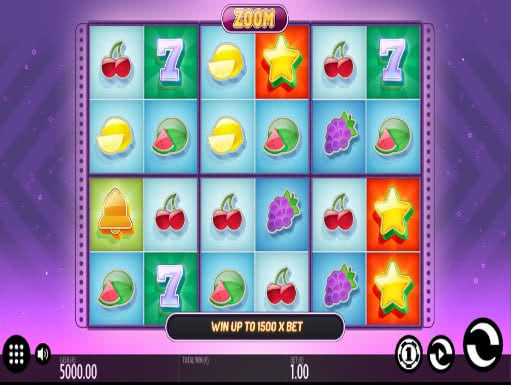 As we already said, Zoom slot machine is notable for its unusual construction: the playing field is divided into six sections 2x2, thus creating 64 possible paying lines - the feature is preserved both in desktop and mobile variant of slot game.

The lower part of the screen is occupied by the control panel. Owing to it you will be able to regulate the course of game and launch all the processes. The first and foremost task will be to adjust bets - choose from 0.10 to 100 coins per one spin and trigger gaming round using huge round button (for one round) or smaller one (Autoplay - predetermined quantity of spins). Also you can mute all the background sounds and music if you feel uncomfortable while playing Zoom online slot - click on the key with speaker depicted on it.