Second Strike slot machine is a video slot related to classic fruity theme, like hundreds before and after it. It doesn’t impress players with some extraordinary features and unbelievable design - no, that’s just another ordinary but qualitative slot with nice pleasant-to-eye design, issued by Quickspin. Its background is created in pleasant pink and violet shades, and the symbols themselves look colorful and dimensional - probably they are not so original, but habitual to players. Finally, jazzy soundtrack is a pleasant addition to the general atmosphere created by this casino game.

The paylines here are fixed - there are 10 of them located on five reels and their amount can’t be regulated. Don’t worry, the amount of wager per each of the lines is adjusted by user, so that you still will be able to regulate the size of your bet which is a very important parameter if you prefer real money slots. Future winnings directly depend on the amount of cash you’ve put on a stake and the symbols participating in a beneficial sequence. In a paragraph below we will try to analyze what icons may be encountered in the game. 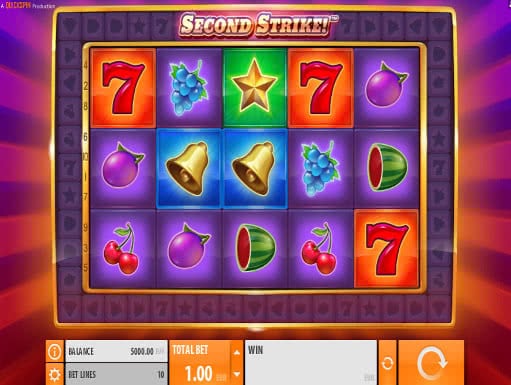 In Second Strike slot game the lowest rewards are given for pictures of fruit like Grapes, Watermelons, Cherries and Plums. Relatively higher prizes are given for Stars, Sevens, Bells or Diamonds. Except for these icons, there are Golden Wild pictures, but the most interesting feature is the one which is called same as the slot is.

The most interesting option is activated when you hit a beneficial combo - then you’ll see that the meter with logos of icons located on the outside of playing field. After having made several circles it stops, and if it stopped on the icon that currently participates in a combo, then you’ll be rewarded with additional images in a sequence and the prize amount won for it grows.