Slot machine The Hitman created by Microgaming in 2007. Just during several years slot became one of the most popular in the world. Hitman deserved this success owning to great bonuses provided for the players. In addition the game is remarkable for high-quality modern design and amazing graphics.

Gaming slot machine Hitman is a video slot with bonus games. To players it's offered a 5 reels and 15 paylines. Bets on lines are available from $0.01 to $0.25 per each payline. Giant winnings are not so frequent in the machine, but the Hitman pleases its players with small regular prizes. Bonus game allows you significantly increase amount of jackpot. Maximum amount that you can win in the machine - 4000 coins, the amount of the second jackpot is 2,000 coins. Maximum bet is 300 coins. Thus, the maximum bet amount is $75. In the game applied Wild and Bonus symbols. Hitman slot machine provides 31 winning combination.

Symbols in the game

Knifes, Dollar bills, garrotes, guns, lethal injections, sniper rifles, pistols and machine guns all appear on the reels. As does Agent 47, Insignia and 18 logos.  As Scatters are used symbols 18, laptop and Insignia. When the image of 18 appears on 3 reels free bonus spins trigger. As in other modern slots in Hitman applies Wild symbol. In this case, this is a role for the Agent 47. This symbol can substitute for other symbols except Scatters when completing the winning combinations. 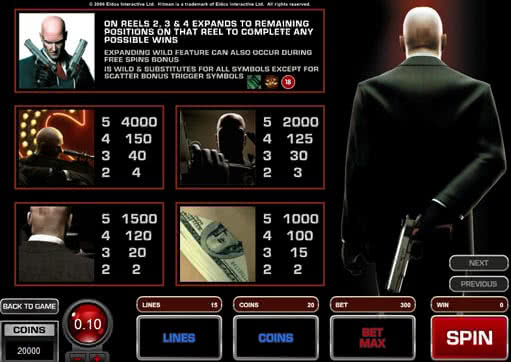 In a standard slot machine three symbols Insignia are highlighted. Behind each symbol is hidden random bonus win amount. Each hidden value is multiplied by the number of coins you bet on the payline with the aim to win bonus. Click on one of the Insignia symbols to open the amount of your bonus win. The amount of your bonus win will be shown after that will be opened two remaining hidden amounts.

With this bonus game you can win up to 270 000 coins. If 3 symbols of Laptop appeared on any position on the reels 3, 4 and 5 the bonus game starts. Agent 47 symbol does not substitute symbol Laptop to start the ICA Mission.

In the bonus ICA Mission game it is shown five targets. Each target has its own range of randomly selected amounts of bonus wins already multiplied by the number of coins you wish to wager and the number of active paylines. Next you will see five types of weapons. You should choose a weapon to retrieve a random multiplier. Bonus winnings will be multiplied by the value of the multiplier.

Online slot machine Hitman is a worthy representative of the modern gaming industry. Any self-respecting player should try this slot game at least once. We are sure Hitman will not leave you indifferent. Quality software and a large percentage of the prize attract a lot of players from around the world.