A Novomatic company has released a free slot machine named Secret Elixir, that differs from most video slots with unusual symbols on the fifth reel. It shows the additional multipliers, which increase the standard payout for combination formed on the given line. Furthermore, the machine has a traditional set of special characters, free spins, chance game and some other functions.

Generally, Secret Elixir is a slot game dedicated to alchemy. It has a five reels, ten paylines (a player can independently activate their number) and three rows of characters on the monitor. As mentioned above, additional icons are situated on the last reel of Secret Elixir, increasing the payout if the combination was formed on this line. These multipliers has the value of x2, x3 and x5. During the free spins x10 and x20 multipliers are also added.

You can play the Secret Elixir slot with a bet size from forty cents to ten dollars per line, and the spin bet can be up to a hundred dollars. Paid combinations are formed of three or four identical images on the active line. They should be situated either in the first three or first four reels. The winning amount is calculated by multiplying the line bet by a combination ratio (up to x1000). The payout is made only for the higher level combination on each single line. 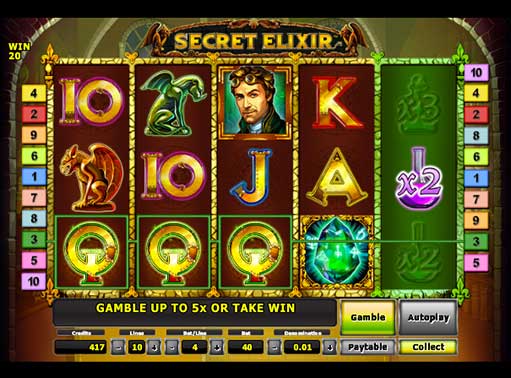 In a chance game a player traditionally needs to guess the color of the closed card. The correct answer means that your payment will be doubled while an error leads to a bet loss. According to official information provided by a manufacturer a theoretical return of the Secret Elixir video slot machine is 95.05%.

Special symbols include a Wild symbol (a guy in glasses) and a Scatter symbol (stone). Wild symbol replaces all pictures except of Scatter. The Scatter triggers twelve free spins at a current bet and increased additional multipliers. There are also other images in this gaming machine. For instance, a blond girl, an owl, a green stone, figures of mythical creatures and letters with numbers showing card denominations. Moreover, there are one more game about alchemy from the developers - The Alchemist online.

Secret Elixir has neither bonus game nor progressive jackpot. Also Secret Elixir might have seemed another trivial game machine from Novomatic, but it is an unusual system of additional multipliers that makes it look appealing. A separate reel with extra multipliers seems to be an interesting solution, which has a potential to be successfully applied in other video slots.