The Magic Money slot game has 5 reels with 9paylines, with added card symbols, and also interesting bonus game. The simple management and beautiful design with the animated symbols made the game slot even more attractive. The gambler needs to choose the bet size, number of active lines and after that to press Start button. It is necessary for a prize that on one or several active lines of payments 3, 4 or 5 identical symbols dropped out. They must to be surely running one by one, since the left reel.

Also you have a chance to double your winning. The Magic Money slot machine has classic option the double game – it is necessary to guess color of the closed card. The player presses the black or red button. The closed card opens. If color coincided the bet will be doubled and if vice versa the bet burns down. It is possible to do an infinite number of times. If you are not sure play double game or not, you have the chance to refuse at any moment. Anyway don`t forget about Aztec Power slot, it is stunning gaminator too.

Bonus Round Game and symbols

Except double game the online slot Magic Money has attractive bonus game. To be launched the combination of three or more Chest symbols have to drop out on the screen. The Chest symbol is a scatter symbol that trigger Bonus Round game with free spins if appeared anywhere on the reels. The player receives 15 free spins.  During free spins game there are appears new symbols – a Staff and a Dragon in a cage. Appearing three or more Staff symbols on the same winline the dragon is released from a cage and starts flying on the screen coming across other signs. From it they explode and the player gets additional money. 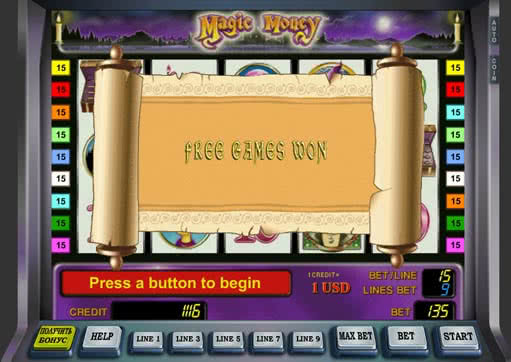 The symbol with the image of the girl with blue hair became one more advantage of the game Magic Money. It is the Wild symbol allowing earning even more money. He participates in creation of additional profitable combinations replacing other game symbols except the Chest scatter symbol. The combination of five Wild symbols is the most profitable combination in game. In this case the game bet is multiplied by 5000 times. The Wizard symbol can increase profit up to 1000 times, and Owl is up to 500 times. The combinations with card symbols drop out more often find make more pleasure of the game.

The highest winnings in the Magic Money gaminator slot player can get during the Bonus Round with free spins. That’s why it will be worse to play by one only activated winline and better to adjust all the available lines to get the maximum profitable and paid combinations.