Magic is a widely used theme in slot machines, so it`s no surprise that Novomatic has turned to the subject for one of its Gaminator slots. Illusionist slot is a cute and quirky game that looks great. It is a competitor of True Illusions slot.

It has brightly-colored symbols that stand out against its plain black background, which means the whole game catches the eye quickly. Add to that the animations that start playing after a win, and the machine has a great chance of keeping you glued to it.

Illusionist`s bonus feature is a free spin round that triggers if you happen to catch three stacked wild symbols on both the first and fifth reels. You are awarded with 15 free spins where the wild symbols on reels one and five stick, making sure the player has a fair chance at catching some good payouts. 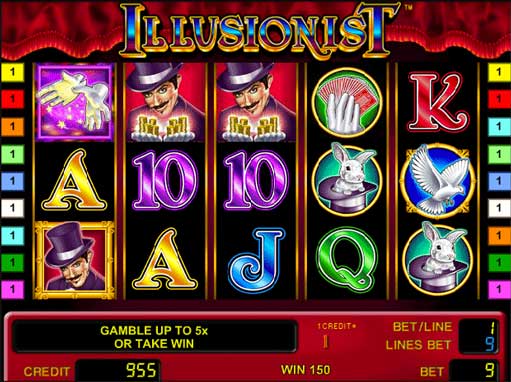 All pay lines run left to right, as with most video slots. There are nine pay lines, and the player can choose to bet anywhere from one to 100 credits per line. If the player is lucky enough to catch a pay line full of five magicians, the machine will pay out 5,000 times the number of credits bet on that line. The game also features a double-up game on all small, regular wins.