Nowadays to get immense treasures and power you will not need to make a deal with the devil. Things have gone much simpler - just launch Faust slot machine by Novomatic and prepare for the journey to the one of the most known stories in the world embodied in famous Goethe’s novel.

Faust Slot Game - Which Side Will You Choose?

10 staking lines and 5 reels do not seem to be much, nevertheless, it’s quite enough to create a rewarding sequence. With payout of almost 96%, this casino slot becomes a true honey pie for gamblers - but only in case you play slots for real money. If you choose demo version, the only reward will be playing points.

The characters of namesake novel become alive on the reels of this casino game. Meet Faust, Gretchen and Mephistopheles and get the biggest possible rewards. The image of the Devil plays two most important roles in Faust slot online - acting both as Wild and Scatter image it replaces images which lack in the combinations and activates unpaid prize rounds at the same time. During Free Spins (by the way, you are given 10 of them), one of the icons is randomly chosen to become the expanding one. 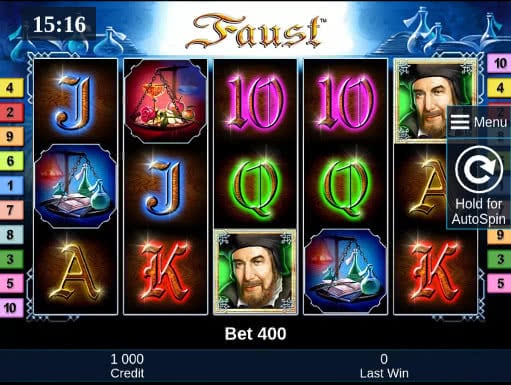 Moreover, the Devil is also the most beneficial picture, and if your bet is at its maximum, having landed five of them on the paying lines, you get 25,000 credits at once.Gretchen is also a paying symbol of Faust slots - it pays 10,000 coins in case of collecting a maximum possible combination of them. Cards are the lowest-paying, as usual.

You are able to wager from 0.01 to 50 coins on a single line, so we may say that stakes are represented in quite wide range, satisfying players with any amounts of budgets available. So, first and most important task is to regulate the size of your stake - only after that you may start playing by means of Start key. Don’t forget about the Gamble option - it becomes active after each win and allows to double prize.