Fairy Queen slot game is one of those legends that took off when it used to be just an offline land-based slot machine. This splendid game took gamblers by storm and that's no surprise. Apart from high-quality graphics and lucrative symbols it's got a story that everyone wants to become a part of – a fairy tale. Remember yourself in childhood – you surely wanted to visit all of those fairylands with unimaginable creatures that you've read about. Now Novomatic gives you a chance to become part of the story involving the Fairy Queen playing one of their best-known gaminators.

It can be said without any doubt that Fairy Queen slot is one of Novomatic's most beautiful products. The slot's eye-catching scenery in the background creates the atmosphere of wonder and harmony with nature. You can go full screen playing this beautiful game without any damage to the quality of the picture, but unfortunately the sound effects stayed the same as in any other gaminator.

The game's in general a lot like other gaminators – there are 5 reels and 10 paylines, following the new gaminators standards. The functional panel is in the bottom and all the buttons look exactly the same as in previously released Novomatic slots. Here you've got options to change number of active paylines, amount of bet, switch to the autoplay mode, make a spin or start the rick-game and check out the paytable.

And yet the atmosphere, created by the background picture of the magical forest and symbols, makes up for it. You are carried away to this magical world by the icons of the Queen, funny strange creatures living in this forest, and some unusual eye-catching plants. Apart from that you find the play cards symbols but they pay the least.

There's a couple of special symbols – the Queen's icon is the wild that substitutes for all symbols but the scatters. Besides, if 3 or more of these scatters are found on the reels, 10 free games are triggered. Moreover, you win in every free game because special symbols are obvious to appear and they can even cover the whole reel. 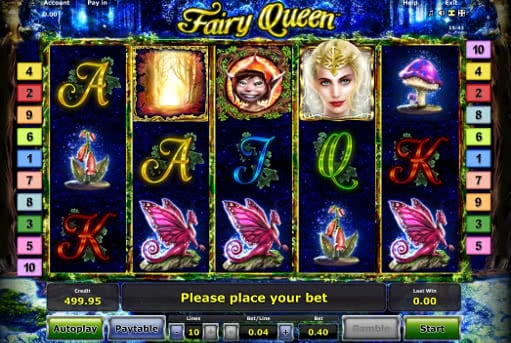 The last aspect worth a note is the chance to double your win (not even once but several times) – you can play a gamble game after each successful spin.

To sum up, Fairy Queen slot game has a picturesque exterior but the functions are standard and too simple to be called thrilling. But if you're looking for something classic and relaxing, this is it.